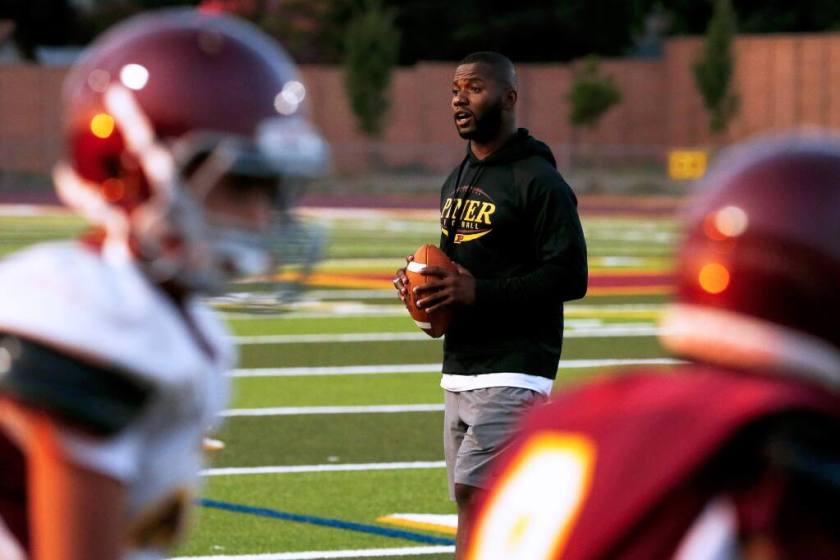 Terence Bell knows that the sport of football requires you to always be prepared.

However, nothing could have prepared Piner High School’s 31-year-old head football coach for a worldwide pandemic that would not only lock him indoors with a new baby, but also cancel spring workouts and leave any future football plans is real peril.

But Bell is not wallowing in the loss of his passion for the time being. He has a different take.

While many football coaches around the country are attempting to cram in virtual meetings and workouts with their players, coaches like Bell believe their players should take advantage of this time at home to enjoy it with their families.

“You should be spending time with your family and the people that you love because you’re not going to get this time back. Some people call me crazy, but I don’t think it’s crazy – it’s just a unique perspective,” Bell said.

Like most coaches, parents and players know, football is a year-round, full-time sport. Not just with games and practices, but student-athletes’ lives are packed with tons of other football-related activities – like team meetings, workouts and film sessions, along with extra events like team dinners and volunteering at fundraisers.

“You have to do all these things normally, and yeah, you’re probably missing like, the family vacations and all the stuff that happens over the summer, but at least right now you get to spend time with your family, you get to be that big brother that you should be and whenever I talk to my kids, that’s what I always hope they’re doing,” Bell said.

Of course, some of his students miss football, and Bell does too, but when the team gets together now over Zoom, they play games or they crack jokes – but they don’t talk football.

Part of this mindset comes from Bell’s background and childhood. He comes from, as he describes it, “humble beginnings” and never took many family trips growing up but instead created memories at home, which he considers to be priceless.

This philosophy of family before football has also grown naturally from the team.

“The situation is really unique, to be honest. I’ve been on a lot of football teams and I don’t know of any situation like this, but the Torres brothers and Michael Collins and Yonaton Isack have created this interesting family dynamic,” Bell said about the 2019 team’s starting running back, wide receivers and quarterback, respectively.

Bell, who grew up in Sonoma County, is often questioned about why he chose to move back after moving to Hawaii to play football.

“Of course, that was paradise, but this is home,” he often retorts.

Recently Bell took the opportunity to prove that love for his community when he donated $1,000 of his pandemic stimulus check to a Piner student’s mother who was nine months pregnant and recently laid off.

In addition to his coaching role, Bell is a special education intern teacher, has student loans and a 3-month-old son – but said he donated the money in order to make sure that family gets to continue to have this time together.

To be frank, Bell shared that his fiancee was not totally pleased with his decision, especially with a newborn at home during a pandemic. But as she sarcastically said once when a friend asked him what he would do with a million dollars, “Terence would give it away.”

Bell says he wouldn’t give it all away but that he definitely would try to help as many people in this community as he could.

While he has put the emphasis on quality family time for his players, he hasn’t completely put football out of his mind. He is still watching plenty of tape and preparing an all-new playbook for the next time the Prospectors take the field, whenever that is.

But for now, with so much still unknown, especially for high school sports, he and his players may have to put some of their plans on hold.

Some of the seniors from last year’s magical season may choose not to pursue extending their football careers in college with so much uncertainty about the future. Others, like running back Adrian Torres, will look to continue playing locally at Santa Rosa Junior College this fall.

Until some sense of normalcy returns, Bell said he and his players will continue to support each other remotely – and rather than lamenting the loss of the gridiron they will instead remember to cherish these moments.

Originally published on The Press Democrat.